The Virtuous Cycle is essentially a Roguelike playthrough designed around repeat runs or 'Cycles'. The mode takes place in the same locations and maps with modified enemy placement and variety. Newly introduced is the Instinct mechanic. Spread throughout the various areas you will visit are special Pillars which will provide you with an Instinct upgrade. These upgrades provide various buffs or modifications to existing abilities which will stay with you throughout your current Cycle. There are hundreds of Instincts available and each Pillar you interact with will allow you a choice between 3 different Instincts. At times, you may even get a Bonus Instinct which will activate along with your chosen one. When a Cycle ends either through completion or failure, all Instincts are lost and new ones will need to be acquired in the next Cycle.

What is the Objective in The Virtuous Cycle?

The main objective in The Virtuous Cycle remains largely the same as in the Main Game. You will need to make your way through each of the three Temples, defeat the Bosses within and collect the Sacred Glands in order to beat the final challenge and complete a Cycle. The entrances to these Temples are always locked with each new Cycle and will require you to either collect certain items or pay a very hefty price to gain entry.

You will need to complete each Cycle without dying completely and while this task may prove daunting, there is an abundance of upgrades both temporary and permanent that will improve your chances with each run. Many of these upgrades can make you considerably more powerful than in the Main Game and to balance this out, the majority of upgrades employ random chance, and enemies are more vicious and plentiful. The map is identical, albeit with varying enemy placement and several additional features discussed below.

The game mode can be accessed by progressing through the Tutorial Area and onto Fallgrim Tower. Once at the tower, head to the second floor and speak to the Twin-Sister and choose to enter the Reverie, which is an alternate version of the tower. A pillar will appear to the Sister's left. Interacting with this pillar will begin a Cycle, allowing the player to choose from the Shells, Weapons and Ripostes they've unlocked.

Do I need to complete the Main Game to play The Virtuous Cycle?

No. The Virtuous Cycle takes place in a separate instance from the Main Game. While unlocked Shells and Weapons are shared between the two, upgrades, resources and items are not carried over into The Virtuous Cycle. Instead, each Cycle begins fresh and your run is modeled around the Instincts you acquire. There are exceptions in the form of the Runic Gate upgrades which persist between runs. See the Runic Gate section below for details. Tar and Glimpses are also retained between Cycles but are not shared with the Main Game.

Note: your item familiarity and your compendium are shared between the Main Game and the Virtuous Cycle on that save file.

The Hadern shell and the Axatana weapon must be unlocked separately in the Main Game and the Virtuous Cycle, having their own unlock requirements in each.

Entering and Leaving The Reverie 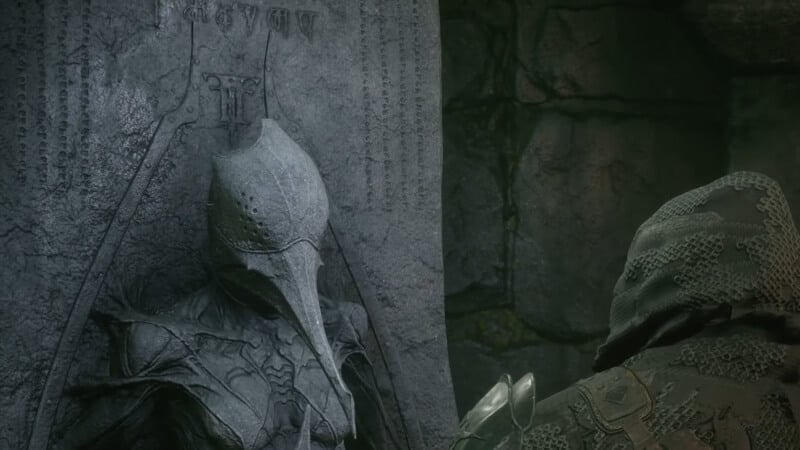 The Reverie looks identical to Fallgrim Tower in almost every way, albeit it looks hazy and dream-like. Weapons and Shells can be found in the same locations. There is now a Pillar to the left of the Sister and a Runic Gate to her right. To exit the Reverie and return to the Main Game, head down to the first floor and interact with the petrified statue of Sester Genessa.

To begin a Cycle, inspect the Pillar to the left of the Sister. You will be given a choice between all your unlocked Shells, Shades, Weapons and Ripostes as well as various notification settings. In the settings menu you can input a Seed number (if none is selected, you will be assigned a random Seed). This will give guaranteed Instincts and enemy placements depending on the seed and which upgrades you have unlocked.

Instincts are an upgrade mechanic unique to The Virtuous Cycle. When playing through this game mode, you do not retain any upgrades or abilities you've collected from the Main Game. Instead, you begin each Cycle with a blank template consisting of your chosen Shell, Weapon and Riposte type. In order to build up your character during a given run, you will need to collect Instincts, which are buffs that improve or modify the various capabilities of your chosen Shell, Weapon and Riposte. 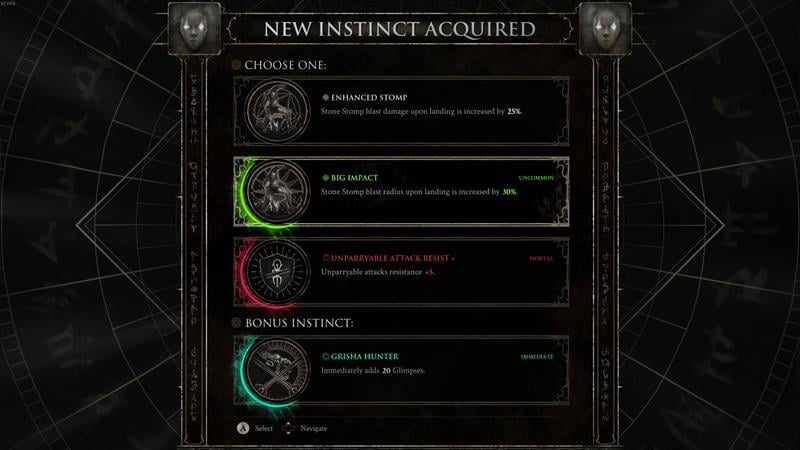 Instincts are primarily obtained by interacting with the Pillars spread across Fallgrim and beyond. Pillars are sometimes guarded by enemies and will glow orange until all enemies in the area are defeated. Some Pillars glow yellow and require a Tar offering to unlock an Instinct while some are free to use. Upon interacting with a Pillar, you will be granted a choice between 3 Instincts which modify a certain aspect of your character for the current run. Some Instincts can also be acquired when you begin a run, defeat a Boss or open certain containers. Instincts are generated randomly but usually pertain to one or two categories and types. There is a small chance to obtain a Bonus Instinct which is activated along with your chosen one.

There are three categories of Instincts: Regular Instincts, Mortal Instincts and Immediate Instincts.

Regular Instincts fall into several types pertaining to direct modifications to your character's effectiveness in combat. Furthermore, Regular Instincts can drop in one of five rarities: Common, Uncommon, Rare, Epic and Legendary. The higher the rarity, the more potent the Instinct. The chance of receiving higher Rarity Instincts can be improved by investing in the Runic Gate upgrades, detailed in its own section further below.

The following is a list of the different types of Regular Instincts:

Modifies the way your Riposte works. (Example: Increases the amount of healing received on a successful Riposte)

Provides a bonus to your stats such as Health and Stamina or reduces Stamina consumption for certain actions.

Provides an effect when you are separated from your Shell. (Example: Chance to fully heal upon reclaiming your Shell)

Modifies the way your Kick works. (Example: Adds a fiery effect to your Kick that sets enemies on fire)

Adds a modification specific to your chosen Weapon.

Provides a bonus specific to your Ballistazooka. (Example: Chance for ranged enemies to drop Large Bolts)

Mortal Instincts provide flat bonuses such as base damage, resistance to specific damage types or an increase to the health gained when you receive a new Instinct. While the bonuses are small, there are plenty of Mortal Instincts you can obtain in a cycle and stacking several of the same types can quickly raise your total bonuses. Mortal Instincts can be obtained in a variety of ways including from Pillars, Bosses and Mini Bosses or by inspecting World Objects which are shiny nodes on the ground. You can have a maximum of 10 types of Mortal Instincts per Cycle but each type stacks with each other.

When acquiring Instincts, there is a chance to obtain a Bonus Instinct which can either be a Mortal or Immediate Instinct.

Immediate Instincts are one-off bonuses that provide a good amount of resources and utilities such as Glimpses or recharging your Last Chance ability (if you've previously been separated from your Shell). Immediate Instincts' effects are provided immediately and are not kept as is the case with Regular and Mortal Instincts.

When acquiring Instincts, there is a chance to obtain a Bonus Instinct which can either be a Mortal or Immediate Instinct.

While not providing upgrades or bonuses, Temple Tokens can be acquired at random from Pillars in much the same way as Instincts. There are three Tokens in the game, each corresponding to the three Temples. When encountered in a Pillar, you will be given a choice between the three Tokens, allowing you some freedom with which Temple to tackle first.

You will spend a good portion of a Cycle looking for these Tokens in order to progress. Alternatively, you can gain access to a Temple by paying the very hefty price of 5,000 Tar at the entrance.

Once found, a Token can be used from your inventory to immediately teleport you to either the unlocked temple or the boss area.

For a complete list of Instincts and their effects, see the Instincts page.

In The Virtuous Cycle, enemy encounters are perilous and healing methods are few and far in between. By default, you can only heal by using a Riposte on an enemy. However, many Instincts will provide a healing effect and the act of acquiring a new Instinct itself will provide you with small amounts of healing each time. These effects can be improved by finding more Instincts. There are even Instincts that drain from your Stamina or Resolve bar instead of your health when receiving a damaging blow.

The Simple Lute, purchasable for 25,000 Tar, can also be used up to 3 times per cycle to restore your health.

Death in The Virtuous Cycle works similarly to the main game. The first time your health is depleted, your Foundling is ejected from your Shell and you have a chance to reclaim the Shell and regain some health. Losing all your health a second time will cause you to die and fail the Cycle. However, you have a chance to acquire the bonus Instinct 'Endless Unborn' which will restore your ability to reclaim your Shell upon death. The chance to encounter this Instinct can be improved by investing in a Runic Gate upgrade.

Tar is used to unlock certain Pillars in the game mode, as well as gaining entry into the Temples in lieu of a Token. Both Tar and Glimpses are used to unlock the various Runic Gate upgrades, which are permanent and help improve your chances at a successful run.

Throughout each Cycle, there are certain consumable items you will find which will grant Tar or Glimpses when used. These consumables are retained between each Cycle and can be used in the Reverie to gain enough Tar and Glimpses to unlock Runic Gate upgrades.

The three lutes found on the wall where the Old Prisoner is normally located provide passive stat boosts when purchased, along with limited use buffs when played that reset with every cycle.

The Runic Gate is an upgrade mechanic unique to The Virtuous Cycle allowing for a deeper attunement with the cycles. The Runic Gate provides persistent bonuses that improve the chances of finding better Instincts and other quality of life upgrades that can contribute to successful runs.  It can be found in The Reverie to the right of the Twin-Sister.  The Runic Gate can also be found in the middle of a Cycle after defeating one of the major Bosses in the three Temples.

Interacting with the Gate presents you with a menu with various Bonuses. Each Bonus can be upgraded a number of times using Tar or Glimpses, with each level increasing the bonus granted. These upgrades are permanent and will be retained between runs, giving you a better chance of succeeding the more you invest into the Runic Gate. The following table lists all upgrades and their respective costs: